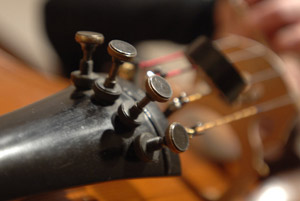 Antonio Vivaldi revolutionised the concerto as a genre with his inspired and passionate ode to nature, The Four Seasons. A native of Venice, the Baroque composer took an extensive trip through the countryside. Inspired by the sights and experiences, Vivaldi then channelled his fascination with the pastoral landscapes and raw beauty and power of nature into one of the undisputed evergreens of classical music. This season, Vivaldi’s Four Seasons return to the composer’s home city. The special performance by the talented ensemble I Musici Veneziani, complete with Baroque costumes, is a veritable homage to the famous composer and his magnum opus.

The concert takes place at the Scuola Grande di San Teodoro in Venice. To get you into the musical period’s atmosphere, the programme begins with Vivaldi’s ‘Symphony in G-Major, RV 149’, and his ‘Concert for Strings and Cembalo in G-minor, F XI No. 17’. The famous ‘Canon’ by Johann Pachelbel provides a little stylistic contrast and expands the Baroque sonic frame. Then the time for the main event comes: the orchestra I Musici Veneziani plays Vivaldi’s The Four Seasons in its entirety. You have likely heard the original melodies and the intelligent counterpoints numerous times in movie soundtracks or as background music in fine establishments, but nothing compares to paying the work your full undivided attention.

Immerse yourself in Vivaldi’s ingenious sound effects – dogs barking, mountain springs murmuring, songbirds singing, a fireplace booming or a winter storm raging. In the stately atmosphere of the Scuola, with the orchestra in fully authentic Baroque outfits, you can easily imagine going back through the centuries all the way to the Venice that Vivaldi inhabited. On the wings of this most marvellous composition, I Musici Veneziani perform a special time-travelling feat that celebrates one of the Baroque period’s finest composers and his outstanding works.

Extract of the program: