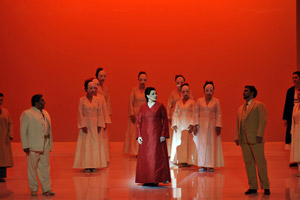 When Giacomo Puccini first encountered Cio-Cio-San, his future heroine, he was completely enthralled by her, although he did not understand a word she said. By chance, the Maestro was at a theatre performance in London, and David Belasco’s Madame Butterfly was playing that night. Although he spoke no English, Puccini sensed the gripping drama of the performance, and it moved him to create one of his signature tragic operas. This season, it comes to the Gran Teatro La Fenice in Venice in all its glory.

Puccini’s Madama Butterfly tells the sad love story of Cio-Cio-San, a Japanese woman, and Lieutenant Pinkerton, an American naval officer. While she loves him with all her heart, he views her as an exotic conquest, pleasant but ultimately insignificant. Soon enough, the bored Pinkerton leaves his pretty Japanese butterfly. In his absence, she gives birth to his son and spends her days lovingly hoping and waiting for his return.

Three years on, Lieutenant Pinkerton comes back indeed, along with his new American wife. Cold to Cio-Cio-San’s feelings, he simply wants to take his son away. The young woman’s fragile world collapses and, bereft of all her love and hope, she takes her own life.

Puccini took his first venture in the Far East seriously and conducted extensive research into Japanese folk music as well as American military marches and army songs. The result is a extraordinarily atmospheric operatic score, rich with musical references and unique thematic characterization. Cio-Cio-San’s stunning aria ‘Un bel di vedremo’ is among the most emotional, tender, and beautiful soprano melodies in the operatic catalogue, and is sure to bring a tear to your eye.

Librettists Luigi Illica and Giuseppe Giacosa also invested considerable efforts in research. Illica even made a trip to Japan to get first-hand impressions of the land and its customs and to incorporate them in the text and stage design. The end result was another prime example of Puccini’s opera vera in the composer’s best traditions.

Despite all the hard work, Madama Butterfly’s premiere on 17 February 1904 at Milan’s La Scala was a flop, an unpleasant surprise that Puccini suspected was the work of rivals. After minor adjustments, the second debut in Brescia on 28 May 1904 went without a hitch and established Madama Butterfly as one of the most creative and moving dramatic operas of all time.