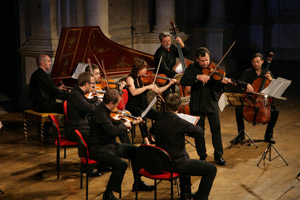 An absolute must for every visitor to Venice! Enjoy what is perhaps Antonio Vivaldi’s most famous work The Four Seasons, masterfully interpreted by the chamber ensemble Interpreti Veneziani at two of the most venerable venues in Venice.

The Interpreti Veneziani (Venetian Master Interpreters), who gave their debut performance in 1987 in Venice, enjoyed almost instant success at home and abroad with their exuberant, lively concerts that display a typically Italian lightness and zest for life.

Virtuoso individual talent and outstanding orchestral cohesion have won critical acclaim from both audiences and the press. Each year, the ensemble performs more than 200 concerts at the Church of San Vidal and these are among the most popular cultural events in Venice.

As well as a busy concert schedule in Venice, the ensemble has also performed at the Bayreuth Festival, in St. Petersburg, Tokyo, Osaka and Sapporo, and undertaken lengthy tours of Australia, Latin and Central America.

The highlight of the brilliant concert is of course of The Four Seasons by Antonio Vivaldi, the composer, violinist and priest who was born in Venice in 1678. This composition consists of 4 violin concerts with extra-musical programmes, each one of which portrays a different season. Each season is preceded by a sonnet that was probably written by Vivaldi himself.

As a virtuoso violinist and opera composer with a strong instinct for effects, the extraordinary musical genius Antonio Vivaldi conjures up a host of natural phenomena – gentle breezes, fierce winds, raging storms occur in every season and alternate with different birdsongs and human activity such as hunting, a peasant dance, ice-skating and much more.

The Interpreti Veneziani round off their programme with selected works and rarely-heard compositions by Mozart, Corelli, de Falla, Geminiani, Sarasate, Haydn, Albinoni etc.

The church of San Vidal and the Scuola Grande di San Rocco offer the perfect setting for this exquisite musical evening.