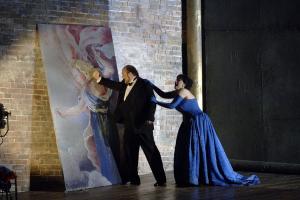 Giacomo Puccini created Tosca with a drive and dedication to operatic realism that lent the work a timeless quality. From the authentic church bell sounds to the religious processions, the Maestro spared no effort to create a haunting, realistic soundscape that instantly resurrects Rome, ravaged by the Napoleonic Wars in the early 19th century. A piece of history, full of drama and amazing music, comes to life this season at the Gran Teatro La Fenice in Venice.

The story of Floria Tosca, the vain and impulsive popular singer, was first penned by dramatist Victorien Sardou. The visceral, violent plot became an obsession of Puccini's and he stopped at nothing until he got the opportunity to write an opera around it. He masterfully turned the melodrama and the unbelievable plot twists and created one of the masterpieces of operatic realism.

The plot revolves around Tosca's fickle nature and distrust of her lover Cavaradossi who is hiding a fellow revolutionary from the bloodthirsty police chief Baron Scarpia. Mistaking the young man's secretiveness for a sign of infidelity, the vain singer unwittingly gives him up to the authorities. As he faces a death squad, Tosca makes a desperate attempt to save his life.

Scarpia proposes a fake execution in exchange for a tryst, and the young woman agrees. The police chief instructs his aide to stage the morning shooting, only to die moments later at Tosca's hands. After the impulsive murder, the singer rushes to Cavaradossi to tell him she has secured his escape. He sings his sweet aria 'O dolci mani' to express his hope and gratitude. To Tosca's dismay, however, the execution is real and, as the guards chase after her for the murder of their commander, she jumps off Rome's high walls.

Puccini's talent and dedication turned Victorien Sardou's critically panned play into one of the most highly respected works in the operatic catalogue. The premiere at Rome's Teatro Costanzi on 14 January 1900 was a resounding success, largely thanks to the Maestro's transporting, atmospheric score.

Rapidly alternating between hasty orchestral passages and character-building arias, Tosca's soundscape immerses the audience into the real-time action like few other works can. Against the tense background, solo spots like 'Vissi d'arte' and 'E lucevan le stelle' shine even more brightly.