The Barber of Seville, Musica a Palazzo 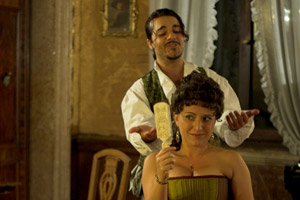 The Barber of Seville, a comic opera in two acts by Gioachino Rossini, was performed for the first time in Rome in 1816, conducted by the composer himself. The opera is set in Seville at the end of the 18th century, where the wealthy Count Almaviva, on the advice of Figaro the barber, calls upon his beloved, Rosina, once in the guise of a music teacher and once as a drunken soldier.

The purpose of this charade is to remove all doubt about the sincerity of Rosina's love and her fidelity, while at the same time deceiving Rosina’s greedy guardian Dr. Bartolo, who also plans to marry her.  After much confusion, the story ends happily when the lovers are finally able to marry.

Tweet
image The Barber of Seville / Musica a Palazzo