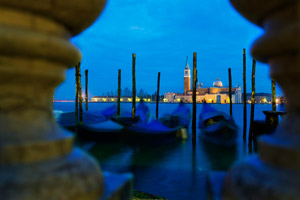 Rigoletto is an opera in three acts by Guiseppe Verdi with an Italian libretto by Francesco Maria Piave. It was first performed at La Fenice in Venice on 11 March 1851.

The main elements of the drama are passion, betrayal, filial love and revenge while the core theme is the curse that triggers the unstoppable and tragic fall of Rigoletto.

"The whole theme is in that curse which even becomes moral" (G.Verdi)

The first act is played in the Tiépolo Room of the Palazzo Barbarigo-Minotto, and the magnificent costumes by Anthony Knight inspired by the 18th century are a perfect complement for the sumptuous baroque furniture.

Rigoletto’s story develops through the halls of the Palace where candle lights create the backlighting effects of a Caravaggio painting, exalting the drama of the Opera.