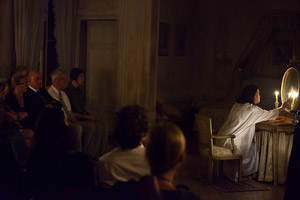 La Traviata by Giuseppe Verdi, which made its debut in 1853 at the Teatro La Fenice, only became the most successful opera in the world after it was revised.

The title figure of this famous, but hopeless love story set in 19th century Paris, is the courtesan Violetta Valery, who falls in love with Alfredo Germont, the son of a respected Parisian family. Alfredo’s father does not approve of the relationship and asks Violetta, who is already gravely ill, to leave Alfredo with whom she is happily living in the country. The pain of giving up the love of her life drives Violetta back to her old life as a courtesan, where her condition dramatically deteriorates. Only after Alfredo’s father reveals Violetta's sacrifice, are the couple reunited. However, their happiness lasts only a few moments before Violetta dies in the arms of her lover.