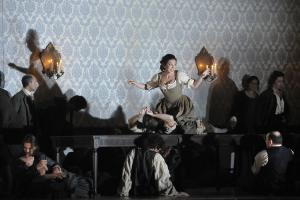 On 29 October 1787, the audience at Prague's National Theatre (today’s Estates Theatre) was treated to a light-hearted opera premiere that gradually took a descent quite literally into hell – and they loved it. Injecting the story of the famous fictional libertine with his usual wit and musical inventiveness, Wolfgang Amadeus Mozart crafted Don Giovanni to entertain as well as shock. This season, the famous opera will do the same on the stage of the Gran Teatro La Fenice in Venice.

Mozart had enjoyed splendid success in Prague with his previous opera, The Marriage of Figaro, and he was quick to receive another commission from the National Theatre there. He decided to collaborate once more with librettist Lorenzo Da Ponte, even though the Italian was currently drowning in other assignments. To save some time, Da Ponte proposed adapting the story of Don Juan, the infamous fictional Spanish libertine and womaniser. Tickled by the story's immoral streak, Mozart gladly accepted.

It is difficult to classify Don Giovanni. Mozart dubbed it an opera buffa, while Da Ponte characterised it as dramma giocoso, or a 'dramedy' by contemporary standards. In reality, the opera presents a journey from fun and adventure into the gradual realisation that all actions have consequences. The story culminates with Don Giovanni's descent into hell where he must pay for his past frivolities and transgressions.

Only a musical genius like Mozart could deliver such a wide and varied musical arc, and he did so splendidly. In Don Giovanni, the music is as integral to the action and the humour as the underlying text. For instance, in the famous catalogue aria of Act I ('Madamina, il catalogo è questo'), where the servant Leporello enumerates Don Giovanni's female conquests, petite women's descriptions are punctuated with shorter notes, while taller or grander ladies are introduced by longer tonal durations.

Mozart uses musical metaphor adeptly to demonstrate Don Giovanni's seductive technique, too: in the duet 'Là ci darem la mano', the alternating verses slowly morph into a duet harmony to indicate the suitor winning over his object of attraction. Towards the end, these clever musical devices give way to a bombastic, dark finale, easily Mozart's darkest operatic music, against which a statue come to life delivers Don Giovanni straight to hell. Goosebumps guaranteed!